If you earn your living working with and around trustees, beneficiaries and the families that create these trusts, it’s probably a good idea to have some sense of how large the “market” is for what you do and what your future prospects look like.

Here’s my guess, based on personal experience and the best empirical data I’m aware of. First the good news: the market’s big — and growing fast. Now the bad: due to extreme market concentration and huge competitive barriers, most of that new business is going to go to a tiny % of professionals.

In an article entitled The Prudent Investor Rule and Trust Asset Allocation: An Empirical Analysis, Prof. Sitkoff of Harvard Law reported that according to federal banking data roughly $760 billion was held in roughly 1.25 million private and charitable trust accounts as of year-end 2006, and according to IRS data in filing year 2007 more than 2 million 1041 tax returns were filed for trusts, reporting $142.5 billion in gross income, $3.7 billion in fiduciary fees paid, and $1.6 billion in attorney, accountant, and other professional services paid. These are all national figures.

And reflecting the rapid growth of this market, Prof. Sitkoff provided updated national figures in Major Reforms of the Property Restatement and the Uniform Probate Code: Reformation, Harmless Error, and Nonprobate Transfers, reporting that as of year-end 2010 federal banking data indicated $870 billion was held in trust accounts (in other words, an increase of over $1 billion or roughly 15% in just four years).

As eye-popping as those figures might be, they exclude the vast majority of trusts. How do we know that? Because the federal banking data Prof. Sitkoff relies on only accounts for institutional trustees that are part of the U.S. Federal Reserve System, they categorically exclude all trusts in which the trustee or co-trustees are private individuals (which is most trusts). And we can expect these figures to skyrocket over the next few decades as we work our way through the largest generational wealth transfer in U.S. history. (See Why the $41 Trillion Wealth Transfer Estimate is Still Valid).

With figures this big, you’d expect a lot more lawyers and other professionals to be active in this practice area. So why aren’t they? Think market concentration. While there may be huge sums tied up in U.S. trusts, those trusts are concentrated in a minuscule slice of the population, meaning the potential pool of clients is correspondingly limited. Which brings me to a cool set of charts recently published in this blog post by Mona Chalabi on the FiveThirtyEight Blog. 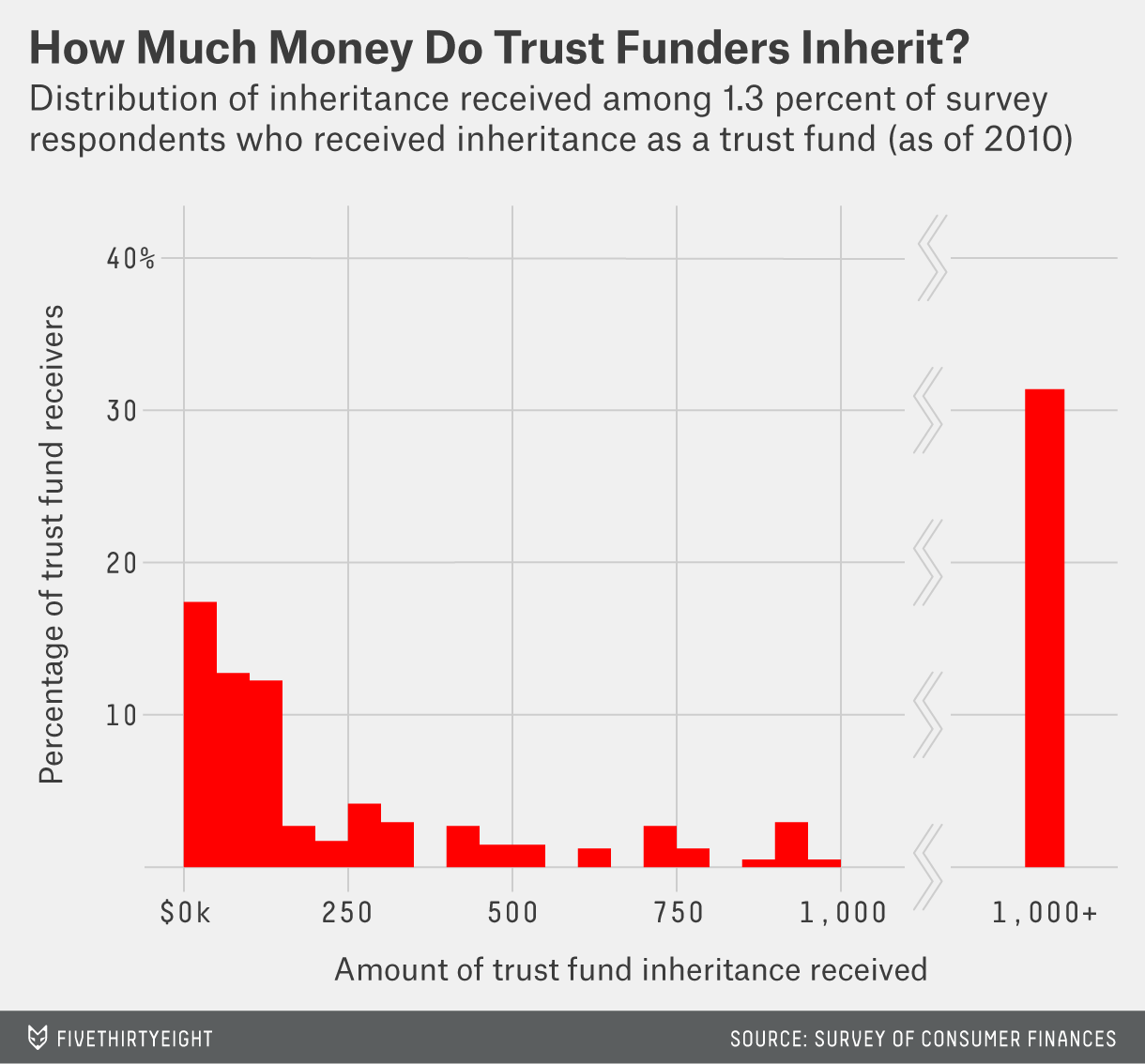 According to Ms. Chalabi, the most detailed data on inheritance in the U.S. comes from the Federal Reserve’s Survey of Consumer Finances (SCF). And according to the latest SCF data available, only 1.3% of the survey respondents who reported receiving an inheritance received it via a trust. In other words, close to 99% of all inheritances are NOT received in trust. (Think market concentration.) Here’s an excerpt from Ms. Chalabi’s post:

The future growth prospects for this practice area are good, but the barriers to entry are huge. In terms of future “market” growth, the stat’s speak for themselves, so I’ll focus on the barriers-to-entry issue.

Malcolm Gladwell writes in Outliers it takes 10,000 hours of focused practice to master any skill. “What’s really interesting about this 10,000-hour rule is that it applies virtually everywhere,” Gladwell told a conference held by The New Yorker magazine. “You can’t become a chess grand master unless you spend 10,000 hours on practice. The tennis prodigy who starts playing at six is playing in Wimbledon at 16 or 17 [like] Boris Becker. The classical musician who starts playing the violin at four is debuting at Carnegie Hall at 15 or so.”

Assuming you have the necessary education (usually that involves a tax or estate planning LL.M. in addition to your J.D.), the only way you’ll log the 10,000 hours of “practice” needed to master this very complex area of the law is by earning your stripes at a firm (usually a small boutique, the big firms have mostly abandoned this practice area) that’s already built a practice serving this highly-concentrated market niche. When it comes to competitive barriers, that one’s tough to beat.